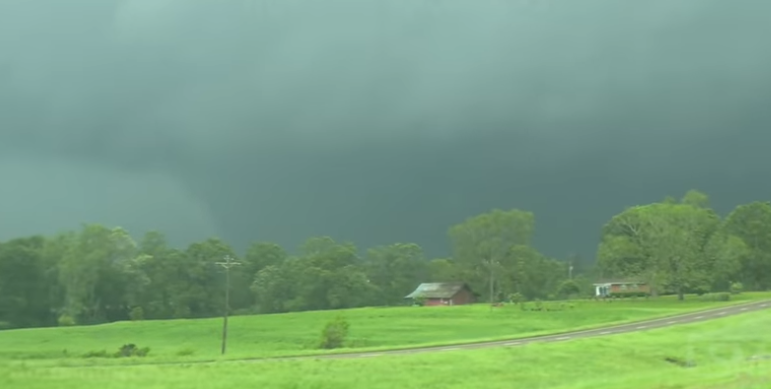 While most of us were enjoying our Easter Sunday here in the UK a brewing situation was developing in America as the atmosphere was starting to bubble into something huge.

By afternoon the atmosphere was ready but so was the storm predication centre, which issued a rare PDS (Particularly Dangerous Situation) with several strong tornadoes forecast and boy they where right.

Huge super-cell thunderstorms developed across parts of Texas, Arkansas, Louisiana and Mississippi but it was Mississippi that saw the PDS risk and rightly so. The image below shows the storm reports and look at the area I have circled. These reports are close together and linear meaning its likely one supercell/tornado that they where reporting on. A long tracked tornado.

I was actually tracking this event myself last night and when i looked at the radar my heart sank. Why? There was a signature on radar that rarely appears but when it does it just confirms the worst.

I took this radar grab last night with a view to seeing the damage this morning and I awoke to what I thought was going to be the case, utter destruction in the path of this Tornado. On the image below where circled is a very bright pink area, almost like a ball. This isn’t heavy rain, far from it. What the radar is picking up is debris lifted by the tornado, this kind of radar signature only occurs in very strong tornadoes.

This one is estimated to be a mile wide, yes a mile wide with predicted wind speeds of 170–205 mph and puts it in the EF4/EF5 category. The image below shows how wide this tornado was, I’ve added red lines to show both edges of this tornado.

The damage has been catastrophic over a very wide area, below are some images from yesterday and unfortunately there have been fatalities with 6 confirmed deaths but is suspect there will be many more.